This Quran Tajweed course will help you recite the Quran exactly the same way the Prophet Muhammad (PBUH) recited it. Our native Arabic teachers will teach you the different rules of intonation and how to apply them to Quran recitation. You or your children will learn accurate recitation of the Quran, and understand the intricacies of the Quranic verse as well as the challenges of proper pronunciation in each part of the mouth. Through one-to-one live classes with our professional Quran teachers, it will be very easy for a Quran student to learn Quran recitation.

You know that the Tajweed Quran learning is significant, so you need to start to learn Quran with tajweed, and you can do that easily with our platform and at the most affordable prices. Just join our Quran tajweed online classes.

The Tajweed Quran helps Muslims to explore the great beauty of the Holy Quran, which goes far beyond the creation stories and laws established by Allah (SWT). The Quran also exists to preserve and direct the Arabic language, which is the language that Allah used to send His verses to the Prophet Muhammad (PBUH).

The Arabic word “Tajweed” literally means ‘proficiency’ or ‘doing something well. It comes from the same root letters as the word Jayyid, which means “good.” Applying to the Quran means giving each letter of the Quran its rights and characteristics, and observing the rules that apply to those letters in different situations when reciting the Quran. We give the letters their rights by noting the basic characteristics of each letter that are present at some times and not at other times.

The Quran was revealed with the application of the provisions of intonation on it. In other words: When the Angel Gabriel recited the words of Allah to the Prophet Muhammad (PBUH), he recited it in a certain way. Show the Prophet Muhammad (PBUH) the ways in which it is permissible to recite the Quran. We must take into account these provisions so that we read them in the way they were revealed.

Because of the importance of learning the Quran with Tajweed for every Muslim in the world, Best Quran Lessons offers “Online Quran Tajweed Lessons” for Muslims who are non-Arab or who live in non-Muslim countries.

Now, you or your children can take Quranic Tajweed lessons online with highly qualified Quranic teachers from Al-Azhar University through one-to-one live sessions. Our Quran tutors will help you develop an accurate recitation of the Quran and understand the intricacies of the Quranic verse as well as the challenges of proper pronunciation in every part of the mouth.

‘Verily the one who recites the Qur’an beautifully, smoothly, and precisely, he will be in the company of the noble and obedient angels’
(Sahih Muslim)

Since the Quran is the book of Allah, we should read the Qur’an in a good way so that we may receive the full reward from Allah Almighty. The only way to read the Qur’an very well is to read it with Tajweed.

Moreover, Tajweed protects the language from errors during the recitation of the Holy Quran so that every letter of the Holy Book is pronounced in the same way as it was revealed by Allah (SWT) to the heart of the Prophet (peace and blessings of Allah be upon Him).

Top Quran Classes provides the best Tajweed classes that cover all aspects of Quran recitation. This makes our students capable of reciting the Holy Quran with a soulful voice.

Providing top-quality services has always been the top priority of Top Quran Classes. We never compromise on the competence of Quran teachers we assign to teach our students. We take every step to ensure that we hire the most qualified online Quran teachers for our students.

The method has an important role in the educational process that no one can deny or underestimate, but this importance varies from one method to another, in terms of its type and suitability to the offered material, so we offer you in our courses the latest methods that help you to raise your level and develop quickly.

We will provide you with a tajweed course certificate after completing your course.

You will learn tajweed Quran with the best Quran tajweed teachers.

Learning Tajweed of Quran will be the best decision for you because of the right prices and because you can choose the right time, and because we have a variety of different courses and also courses for children Through modern means of display commensurate with the recitation and intonation, such as the computer, where it is possible to listen to the recitations recorded on compact discs (CD).

Training the child to read the letters with perfect pronunciation: this is done by a lot of careful recitation so that each letter takes its right from the extension if it is elongated, the slur if it is slurred, and the hamz if: it is muted, and the stillness if it is static, the movement if it is moving, and the manifestation if it is visible.

Learning Quran with tajweed and the method of the correct letter exits: Correcting the letter exits is one of the most important principles used in teaching the rules of intonation so that each letter takes its own characteristic in it and gives each letter its right in terms of amplification, cursiveness, homogeneity, and convergence.

The institute is run by professionals. They have a good understanding of Arabic and also teach Quran with translation. Highly recommended.

ALY AHMED / USA
Thank You Learn Quran Online with Tajweed.
I personally read the Quran with complete Tajweed and I only prefer to read with Tajweed. Due to my busy schedule, unfortunately, I cannot give proper time to teach 3 of my kids. I hire 2 Quran Academies before, but they can not teach in the way I want. They are not following the actual Tajweed.
I found these guys (Learn Quran Online with Tajweed) who are best in teaching the Quran with Tajweed.
Thank You – Highly Recommended – You can trust and hire them.
AMJED / UK 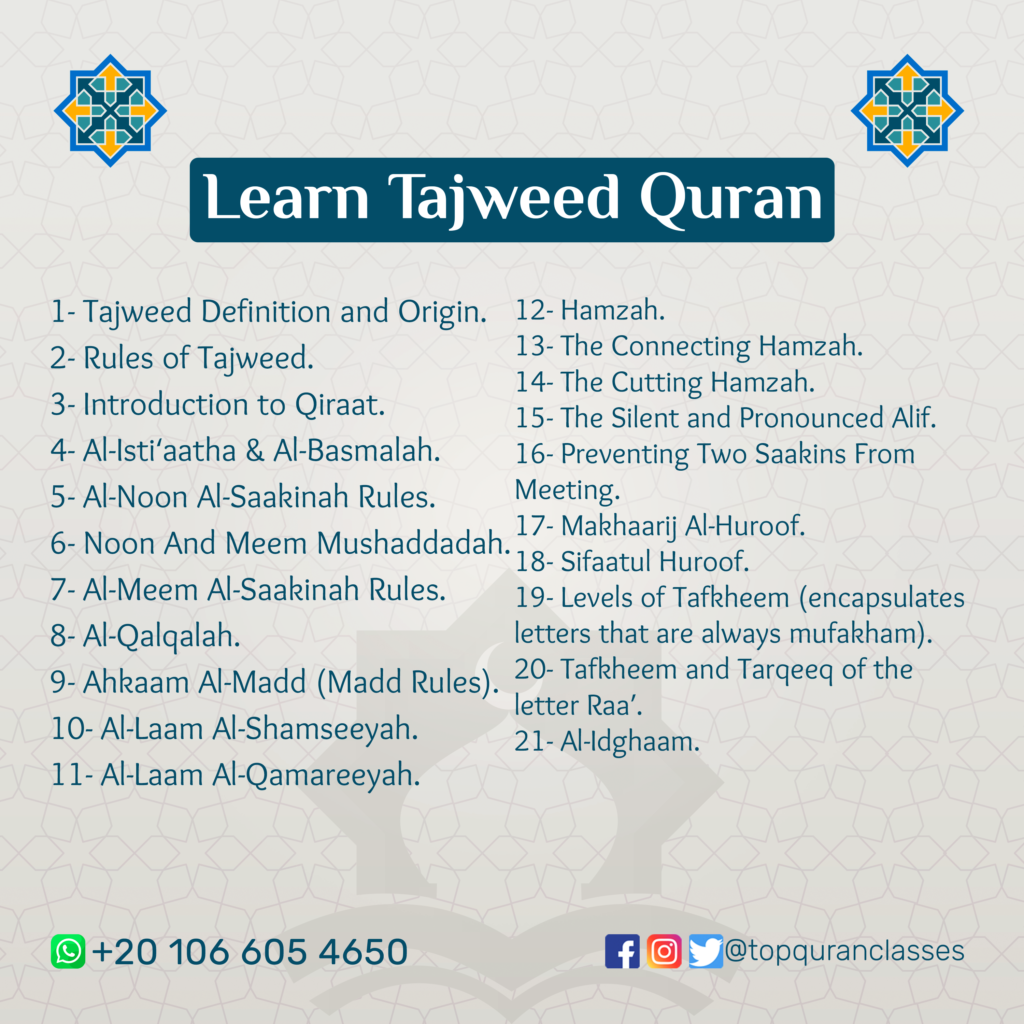 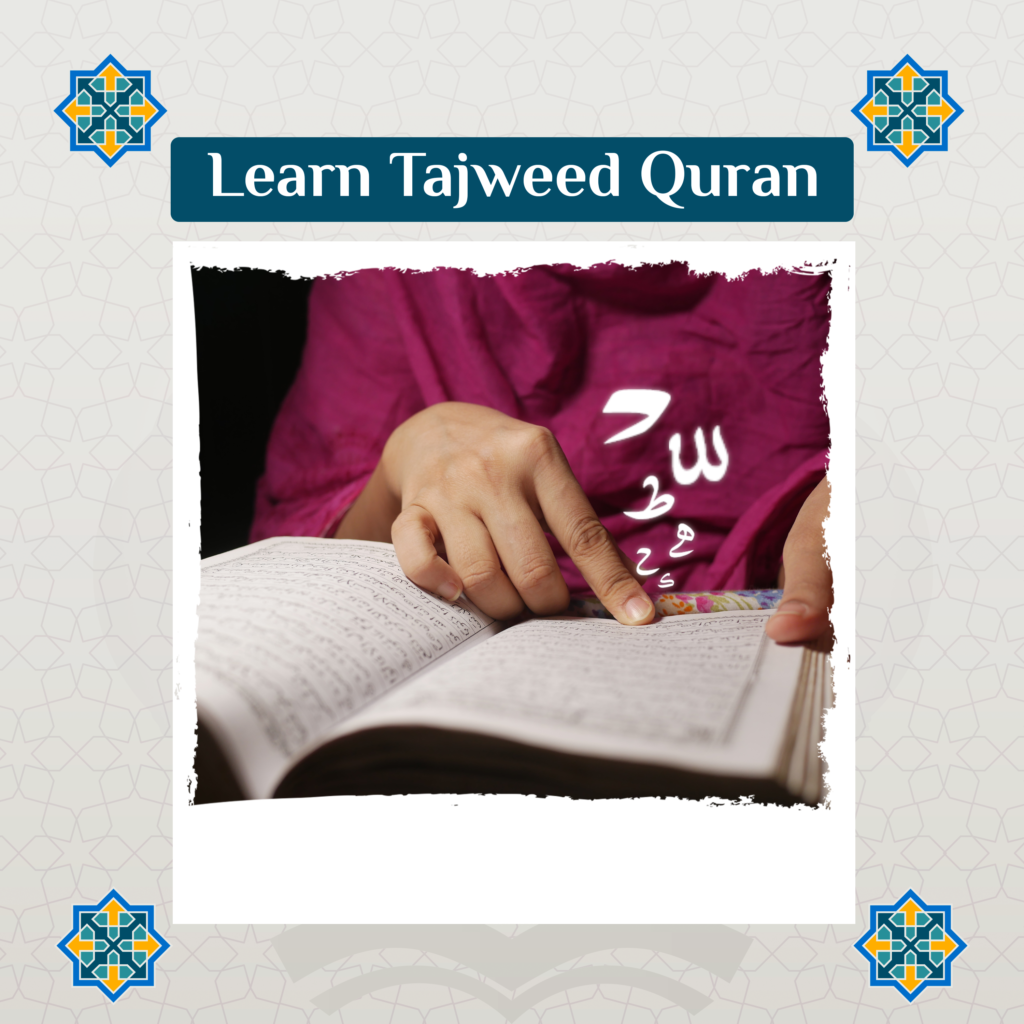 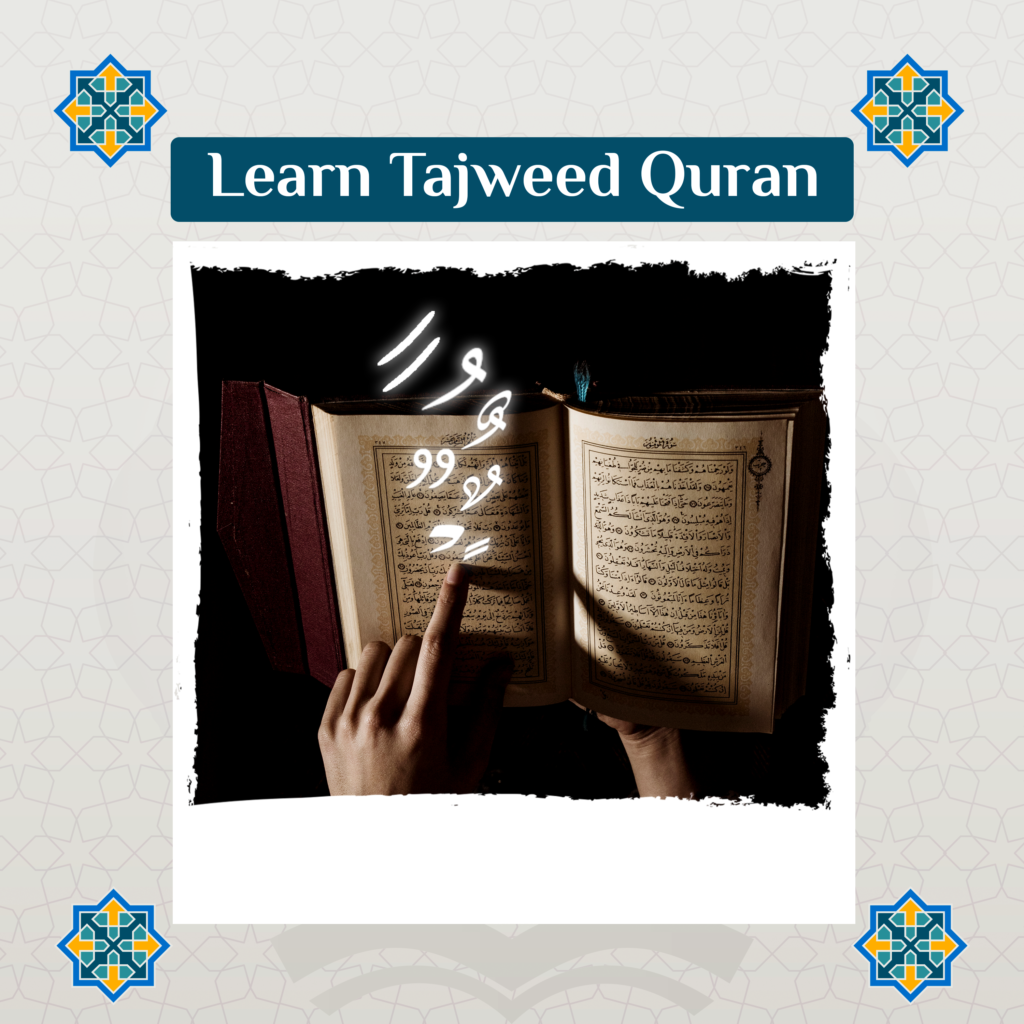 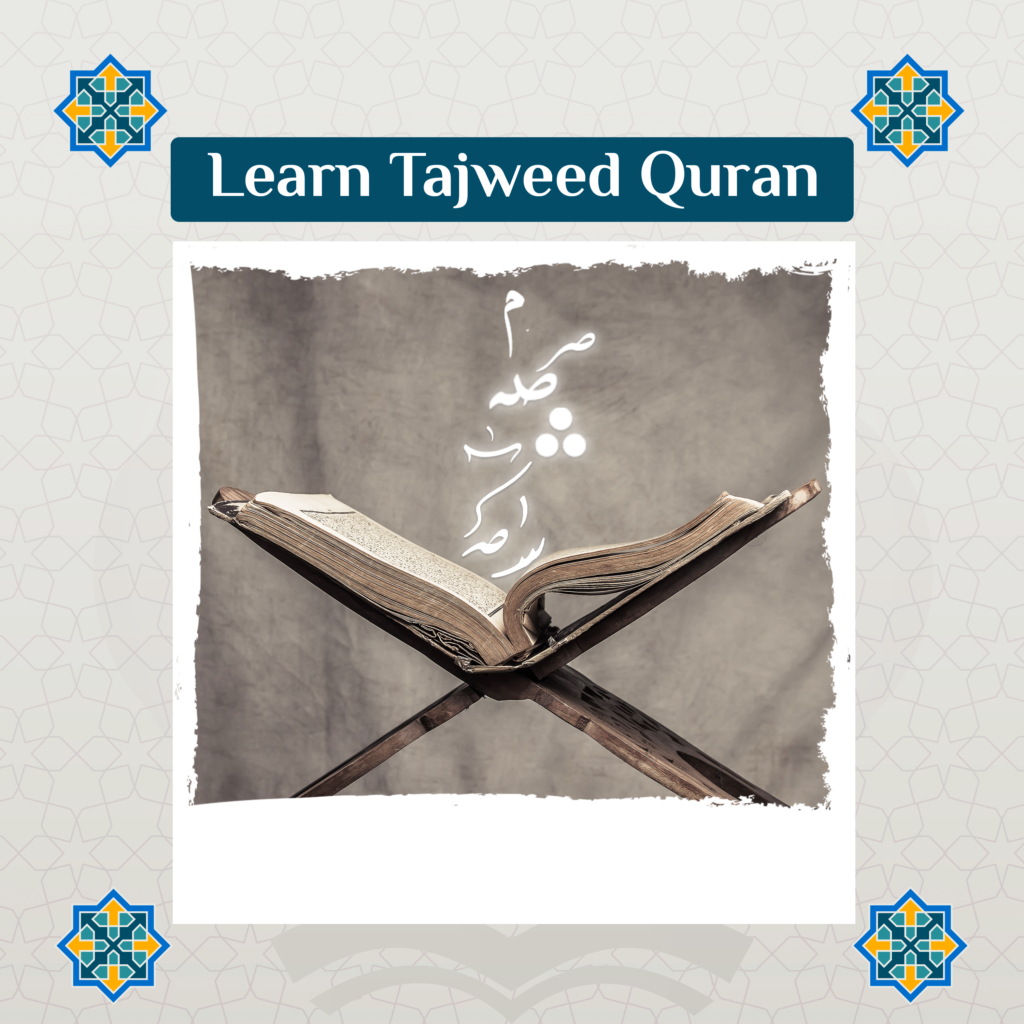 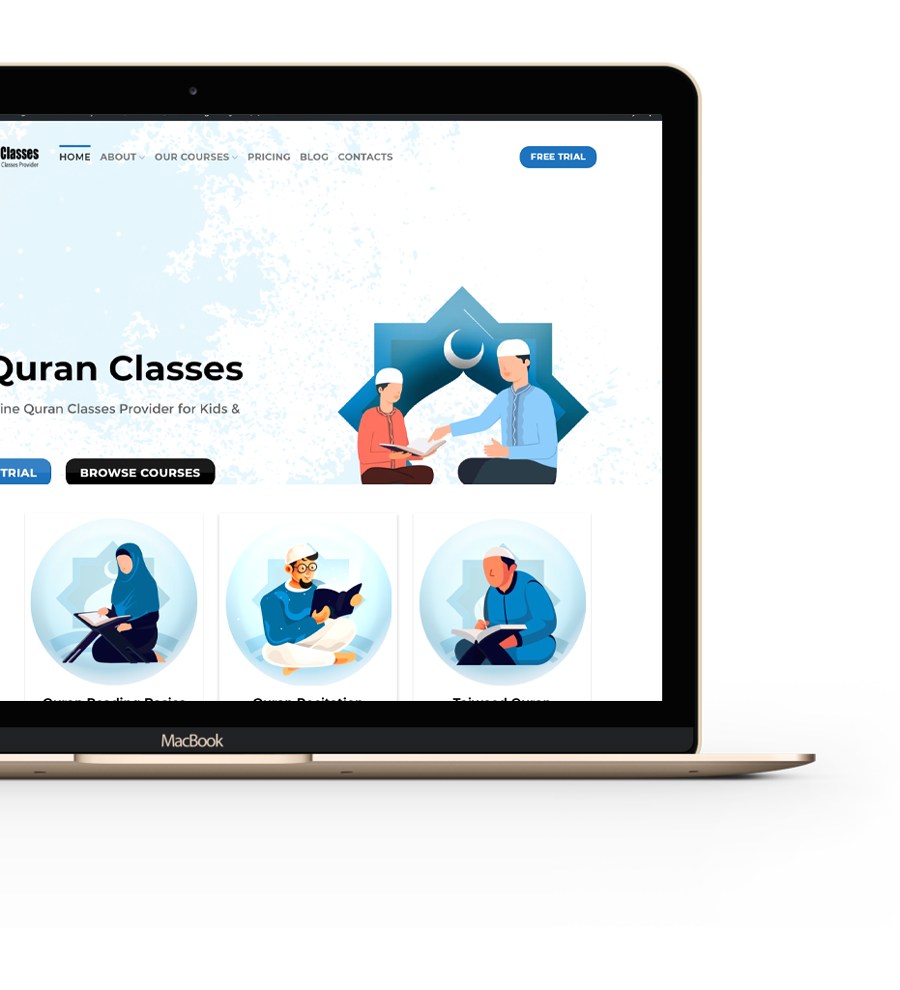 We are offering a real free trial of Quran classes. Start learning with tutors having years of experience in online Quran teaching.

What is Tajweed Quran?

The Arabic word Tajweed linguistically means “proficiency” or “doing something well”. It comes from the same root letters as the word Jayyid, which means “good”.

Tajweed or Tajwid Quran is the knowledge and application of the rules of recitation, so the reading of the Quran is as recited by our beloved Prophet Muhammad (Peace and Mercy of Allah be upon him).

The Qur’an is the word of Allah, and it’s every syllable is from Allah (SWT). Its recitation must be taken very seriously. The purpose of the science of Tajweed, in essence, is to make the reciter proficient in reciting the Qur’an, observing the correct pronunciation of every letter with the rulings and characteristics which apply to it, without any exaggeration or deficiency.

Each Arabic letter has a Makhraj (an exit or articulation point from which it originates) and Sifaat (attributes or characteristics). Knowing the Makhraj and Sifaat of each letter is an important part of Tajweed. Sometimes two letters have very similar exits, which makes mixing them up easy. So, if a person does not know the attributes of each letter, he may change the meaning of the words in the Qur’an recitation. Observing the rules of Tajweed in reciting prevents the reciter from making mistakes in reciting the Qur’an.

Is learning Tajweed mandatory to recite the Quran?

The Holy Quran is the word of Allah, and every syllable is from Allah. So, it should be recited correctly applying Tajweed rules.

The majority of scholars agree that applying the Tajweed rules of the Holy Quran such that clear mistakes are avoided is an individual obligation (Fardh ‘Ayn) upon every Muslim who has memorized part or all of the Quran.

What is the cost of learning Tajweed online?

You can learn Quran Tajweed at Top Quran Classes starting from 30$ per month which grants you 4 Hours per Month, 1 Hour per Week, and One/Two Days per Week.

How long does it take to learn Quran recitation with Tajweed?

At TopQuranClasses.com, a child(5–8) of an average IQ could learn to recite Quran with Tajweed within 3 years. As it takes time to make them learn rules first “Qaida e Tajweed”. For a child of(10 – 13) with an average IQ, it may take 2 years. For elders, it could be less than 1 year depending upon the interest, the time they give to learning.

How to learn Quran Tajweed online?

What is the difference between tajweed and Tarteel?

Tajweed Quran is the science of the rules of recitation of the Quran. Reciting with tajweed means that one is applying the rules of tajweed. A related word is mujawwad.

How many Tajweed rules are there?

There are over 70 rules of Tajweed, the most important of them are:

You can study all of the tajweed rules easily from the comfort of your home at Top Quran Classes Institute.